Teplice Observatory is located 80 km north of Prague, Czech Republic, on the small hill called Sand Hill in the southeast part of the North-Bohemian town Teplice. It is a part of North-Bohemian Observatory and Planetarium in Teplice, a non-profit organisation with focus on the popularisation of astronomy and science. The SHOT started its observation in 2015, shortly after Teplice Observatory was equipped with a new 43-cm f/6.8 reflector on a precise German equatorial mount. In 2016, the sensor became involved in the European Space Agency (ESA) activity P2-SST-X “Support Observations and Sensor Qualification” within the Space Situational Awareness (SSA) programme as a sub-contractor of Italian company e-GEOS. The SHOT sensor was successfully qualified for SST observations during this activity. The observations were interrupted from June 2017 to August 2018 during the general reconstruction of the main building of the observatory. From September 2018, the sensor is involved in the ESA project P3-SST-III “Robotic Telescopes Demonstration” with the aim to fully automate its operation.

The SHOT sensor consists of 0,43-m f/6.8 reflector, high-precision German equatorial mount with absolute encoders and a CCD camera. The telescope is used in conjunction with the 0,66× focal reducer for the resulting focal ratio of f/4.6.

Scientific CMOS camera and two CCD cameras are available for observations. For the first campaign, a front-illuminated CCD camera Apogee Aspen CG9000 with field-of-view (FOV) of 64´×64´ was used. Pixel binning 2×2 is preferred for faster download of images acquired by this camera. The second CCD camera is a back-illuminated CCD camera Apogee Aspen CG230 with FOV 55´×55´. This camera has smaller FOV, but it reaches higher quantum efficiency (Q.E.). From 2022 the FLI Kepler FL4040 scientific CMOS camera is used for observations. This camera has FOV 64´×64´ and allows fast readout up to 5 frames per second.

The sensor is located inside a classical 5.5-m dome with 2-m shutter opening. The dome shutter opening/closing is driven electrically. All objects more than 10° above the horizon are observable by SHOT.

SHOT data acquisition process has been mostly automated, but some levels of the automation (e.g. scheduling of targets, streak detection) are still under development. Real-time tracking of the selected target is based on simultaneous pointing and tracking of the telescope, dome slewing and CCD image capture control. A software has been developed for batch acquisition of scheduled targets. Images acquired with the CCD camera are calibrated for dark frame and flat field and saved in the FITS format.

Methodology and observing strategy varies depending on the target tracking speed. At the end of the processing chain there is a formatted message in the TDM or MPC standard format.

For “slow” targets (e.g. MEO and GEO satellites) with tracking speed less than 60 arcsec per second the Automatic Satellite and Asteroid Processor (ASAP) for data processing can be used. ASAP is a software developed by Iguassu Software Systems in the frame of the ESA project “Demonstration Test-Bed for the Remote Control of an Automated Follow-Up Telescope” and its development continues in the present ESA SST activities P2-SST-X and P3-SST-III, in which the SHOT sensor is involved.

The observing strategy required for processing images by ASAP is based on the telescope tracking with the satellite speed (in both axes) and the telescope moving back to the same coordinates after each exposure, resulting in all images having the same right ascension and declination. Finally, a reference frame with sidereal tracking of the same field is acquired.

We need at least 5 positions for a successful automatic detection of the target. Therefore, the transit time across the SHOT sensor’s FOV has to be less than 60 seconds, because after each exposure (when the target is tracked), we need typically 15 seconds to move the telescope back to the exact initial position to keep the original star field. The typical exposure for these targets is 2 seconds. For fainter space debris objects we used exposures 5 or 10 seconds.

For “fast” targets (LEO) it is impossible to use ASAP strategy. In this case, the telescope follows the sidereal motion and the target is captured as a streak even for short exposures of 200 milliseconds used in our campaigns. Typically, we have only one position of the object at the given star field, because during the image download the object leaves the FOV. The celestial coordinates of the target are measured manually by the LEOAstrometry tool developed at Teplice Observatory. The tool can be used also for manual measurements of very faint debris targets that cannot be recognized automatically by ASAP.

Observations of NEOs can be processed automatically with ASAP or manually using Astrometrica software. So far all minor planet astrometry was performed by Astrometrica. We have successfully used the “Track and Stack” method implemented by Astrometrica for fast moving objects detection, and the detection limit for such objects was increased up to 20m. The automatic NEO processing with ASAP will be tested during 2019.

In the last campaign performed from May 20 to May 29 2017, the SHOT sensor performance has been verified by ESA. We observed intensively 6 different MEO and GEO targets (satellites and debris objects). In total, 270 tracklets in the standard TDM format (Tracking Data Message) and 3173 astrometric positions were obtained. Analysis of GPS data shows that the standard deviation of residuals relative to the reference SP3 orbit is about 1 arcsec after accounting for the time bias of 54.4 ą 3.6 ms due to the shutter latency.
During the same campaign we observed also LEO targets (two NOAA 11 space debris objects and Sentinel 2A and 2B satellites). In total 30 passes/tracklets and 318 astrometric positions were obtained. The comparison of Sentinel 2A batch orbit relative to the reference SP3 orbit shows, that after accounting for the time bias of 56.71 ą 0.15 ms, and the elevation bias of −0.002273°, the results are well within the accuracy envelope for LEO orbits defined in the SST System Requirements Document (i.e. 40 m radial, 200 m along track, 100 m cross track).

In March 2015 we started CCD astrometry of minor planets and comets, and we received the observatory code K62 from the Minor Planet Center. In 2015 we published 103 astrometric positions of Near Earth Asteroids (NEAs), comets and other unusual objects in 21 Minor Planet Electronic Circulars (M.P.E.C.). With a 4-min exposure we are able to measure precise positions of objects as faint as 20m. Using the method of CCD images stacking, we can reach this limit also for faster moving asteroids. We detected small (5-m in diameter) asteroid 2015 GL13 in the distance of about 500,000 km from Earth and a space debris object with the designation WT1190F a day before it entered the Earth’s atmosphere on 13th November 2015. The total residuals of our published observations show that the accuracy of astrometric positions is better than 1 arcsec in 92% of cases and that it is not worse than 2.1 arcsec for all published positions (103 astrometric positions).

There is a continuous development of the SHOT sensor. The dome shutter will automatically close in the case of bad weather conditions. A new SHOT control software has been developed and tested. It includes the accurate time determination, a better graphical user interface and increased autonomy of the observation. The future development of the software will focus on automatic processing of scheduling messages, automated LEO and NEO astrometry and automatical handling with output messages. 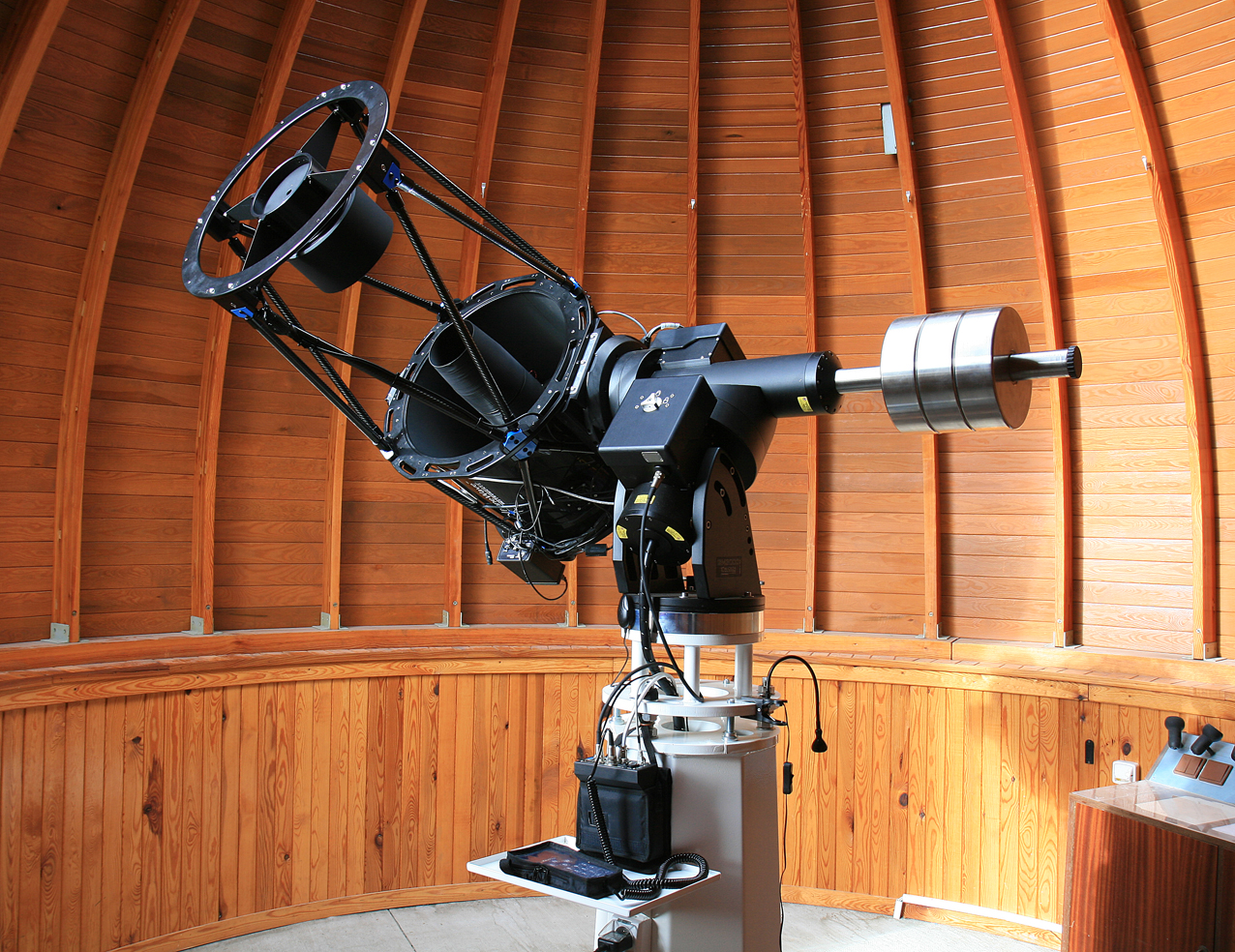 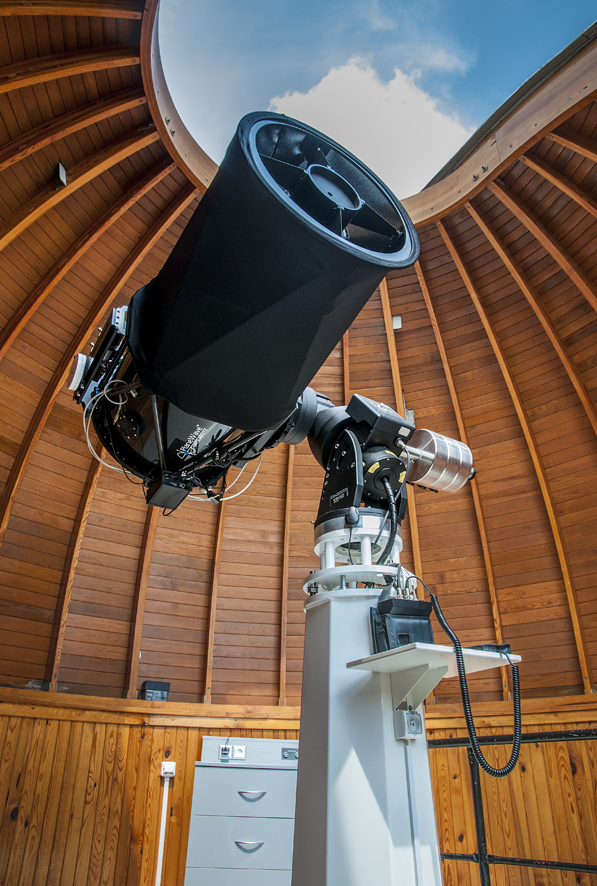